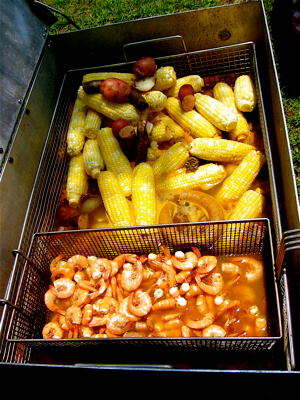 No frogs are involved,
other than the happy singing chirpy and croaking ones
that we hear while preparing it in our great outdoors.

Frogmore Stew is a standard mixture of boiling water with some Bay Seasoning added (you can’t add too much, it’s not like salt or pepper), and SHRIMP (can’t add to much shrimp!), and sausage and corn on the cob. Some add little round potatoes because they’ll taste so good from being cooked together.

In the last quarter of the 20th Century, once our island home got found, in our post- Pat Conroy era, the newly arrived clean-cut Come-Ya’s started calling this Beaufort Stew or Beaufort Boil or some such names that skirted the essence of what it is, which is a fine lot of good eating that’s served by straining the pot of water, then dumping out the items onto a very large table with a newspaper tablecloth.

Then, eat with your hands and talk about how good we (used to) have it around here.